On 15th of April 2021, the sixth graders of New Salata Campus put up an informative assembly on the importance of preserving world heritage.

On this day, a virtual assembly was conducted. The assembly began by seeking the blessings of the Almighty, followed by a beautiful thought. An enlightening speech was delivered to enhance awareness on World Heritage Day, highlighting upon its history, relevance and importance. The limelight of assembly was ‘Poster-making’, to depict different cultures and heritage of the states of India and across the world. Students participated in the assembly with graceful outfits related to their tradition, and learned that heritage refers to practices that are passed down through the years, from one generation to the next which includes culture, tradition, clothing, flora and fauna and also historical monuments.

In this special assembly, the teacher told the importance of the heritage monuments and the students were advised to preserve and conserve cultural heritage.

The Principal, Mr.M.P.Philip, said identity of our nation and our heritage was a part of their own identity.

The Vice Principal, Mr.Dharmaraj, said school was a platform where students understood various cultures and acquired a sense of preserving them.

The program culminated by a PowerPoint Presentation.

On this occasion of global importance, the students of class VI, held their assembly with great zeal and enthusiasm. 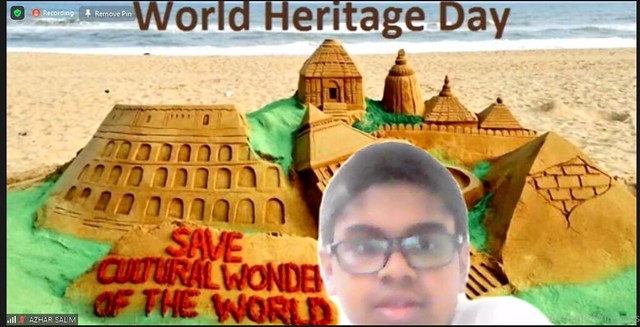